I can’t stop thinking about the old man and that fluffy, little pooch. When the vet warned her days were numbered, my geriatric pal thought it was from the same epidemic that snuffed his older brother, 67 years ago. It didn’t hit him that tuberculosis doesn’t infect dogs because back in the killing fields of WW2, it buried legions of his Army pals before they could rise, armed at the crack of dawn, and put up a real fight.

I need more. In the sun-splattered kitchen, we pour over fading photos, searching for clues. Under the table, the dog sniffs our feet. My camera follows the rotation of the old man’s dawdling brain.

He looks up and smiles at his wife. Junya rouses him with her eyes. In the wake of a massive stroke, he tells me as much as he can remember. She helps. Across the table, Polish flies. 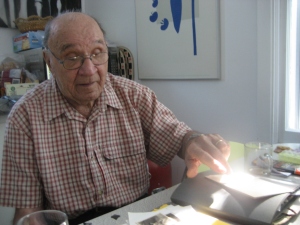 It was a bitter winter, 1945, the endgame of the war. Eddy was trapped, starving in a Russian prison, while his big brother hid from sight in Poland’s occupied forests, his last breath in a frozen, unmarked grave. He didn’t get the news until much later when the Red Cross finally tracked him down in Canada with the message- his brother was dead, and his mother needed to know he was alive. He says, once, twice, three times: I still have the letter. Junya looks at me and shakes her head.

The dog is at his feet. I offer some dark chocolate, a bitter sweet.

His name was Leonard. Lee-o-nard. We rode our bikes in the house. Mama would run after us with a… a…

He turns to his wife. She smiles and continues his thought:

He used to work as a medic. He would say: Like a diaper, life is short and full of shit.

Eddy and Junya crack up. They’ve long out-lived the joke. My nose screws up. The dog crapped on the floor. His snowy-haired parents clean it up in a slow-motion pas-de-deux that trumpets their advancing years. As we age, memory clouds and we can never be really sure what is true. Or what becomes a dream.

Eddy and his long-gone brother

FAN THE FLAMES: My dear readers, would you help produce this series of love stories about an old man and a puppy – as a book?? If so, please…