I didn’t see it coming. I wasn’t thinking.

The sudden, violent impulse to weep. To sob uncontrollably, a rushing river of convulsing sorrow. To wail and tear my clothes. To throw myself to the ground.

In the blur, I feel the arm of my friend Jenny slip around my shoulders. She’s a Mom and must have intuited the roiling wave of grief before I knew it was there. I fumble for a kleenex to dam the tears that are threatening to spill and flood the room. I am in a public space. I am far from my comfort zone for serious distress. Far from my isle of loneliness. Far from being alone.

Much to my surprise, I have found myself in synagogue, on my own volition, for the first time in years. I have found myself standing under the glare of florescent lights in a loaned Maronite church hall, in the middle of a lively congregation of swaying, praying Jews, part of a progressive, social-justice-seeking, non-denominational Montreal group called the Mile-End Chavurah. Although I identify culturally as a Jew, despite my traditional, Jewish background and education, I have no relationship with any god or religion, outside of love, that is.

I think there are a lot of people here like me.

It is the spiralling music that unleashes the sorrow. The mournful melodies like the voices of the dead that haunt and manifest the Jewish soul. The hopes, dreams and prayers of my grandparents and east-European ancestors, some who escaped the only homes they ever knew to save their traumatized lives. For some reason we called them immigrants, but they were refugees.

I have been known to wonder, why them and not me?

Eleven innocent people were just slaughtered by a toxic, white man, a terrorist, white supremacist, spewing his legally licensed AR-15 and bloody hatred all over the Tree of Life synagogue in Pittsburgh. An older man who was there when it happened, is with us, one week later, in Montreal. When Rachel, the luminous, spiritual leader of the service suggests that those who had never been with the Chavurah before stand up and say their names, the old man quietly untangles his little granddaughter from his arms, rises up and tells us that he had been in praying in another room, a smaller sanctuary, when it happened. A good friend of his was not so lucky.

A few men stand up and introduce themselves as Muslims from a Canadian Muslim association. They are here in solidarity, like so many of us.

Rachel acknowledges the two African-Americans who were murdered in cold blood by another white, male supremacist on the same day, with far too little mention in the mainstream media. The killer had first tried to get into a black church, but the doors were locked.

Laughing children swarm the congregation to find their parents. A delicious, potluck lunch is about to be served. But, before we eat, we are asked to move in as close as possible and literally hold each other. My friend Joseph stretches his long arms over his two glorious kids, his ex-wife Jenny, and me. My eyes pool with tears. I think, my heart is your sanctuary, my heart is yours.

We are here together, we are not alone. 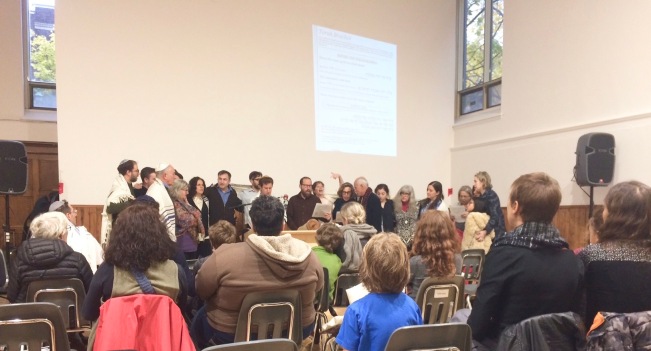 *Some times ads will appear that are not selected by me, but rather generated by WordPress advertising software.

6 Responses to The Sanctuary