Love & Squalor in the Middle East, 2

A shy Bedouin boy was stabbed to death in the Negev desert of Israel/Palestine. At night, in front of the fire he built, by the stranger he invited to share his food and tea. His name was Awwad Amrana, and he was 13.

A spirited Jewish girl grew up near Awwad’s camp. They were friends, she was close to his mother Frazah and their family. When he was killed, she identified his body at the morgue. Her name was Tali Goodfriend, and she was 13.

The following is a sequel to that story.

The phone drones through the halls of the school in Montreal. Tali, 37, is with her students, at work. It is the Israeli Embassy in Ottawa. The other teachers are alerted, the receptionist calls for Tali, and tells her to sit down. They hold her in a circle, her heart clangs. Another boy she loves, her 19 year-old brother Ari, is dead.

Tali was the oldest of nine kids, the outspoken leader of the pack. At 14, with a green blackboard, puppets, books and a few fancy moves, she taught them all in her DIY desert school. Education was not a priority for their father, but it was her biggest dream. Ari loved to curl up to his big sister and lay his head on her shoulder. He was generous and sweet, not a mean bone in his body. Tali was his teacher, his role model and loved him like a mother. 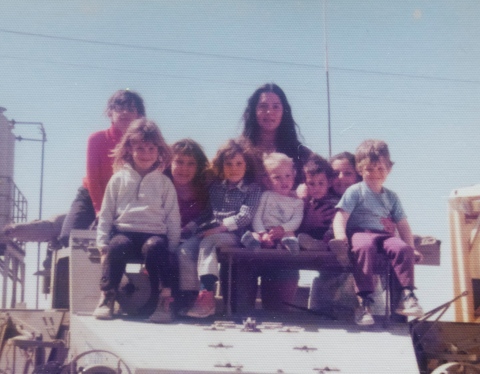 By the age of 25, no longer able to live by her father’s decree, Tali left her family, her father’s kibbutz and his messianic dream, to get a formal education and find her own voice, in Montreal. 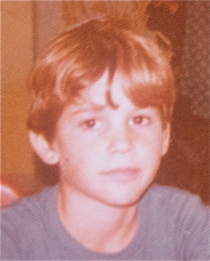 When she left, she was disowned, and the family fell apart. Three months later, almost all the siblings and her father’s first wife, ran away from the desert, in the middle of the night. Ari was the only child to stay behind with their parents, a massive void in his 10 year-old heart, when all he ever wanted was for everyone to get along.

It took her ten years, and Tali went back to the desert to see her family, the summer before Ari died. She wanted to reconcile, forgive and start anew. It was tense, people were scattered and divisions were deep. Her hope restored the night she spent with Ari in Jerusalem; they bonded over their mutual desire to bring the family together, to make peace. The next morning, she walked him to the bus, so he could return to his base. He looked her in the eyes, we have to work on this, Tali. Her soul rose, yes.

The voice on the phone from the Israeli Embassy informs Tali that there is a plane ticket waiting for her at the airport, to go home, get some clothes and her passport, everything else is done. At her apartment, Tali sees her brother on the news, covered by a blanket, on the ground, outside the bus. She knows it is him and it wounds her that he is alone.

Tali is whisked through customs and into El Al’s first class. She sees snapshots of Ari as a baby, a little boy, and over and over, in the back of the bus. She can’t sleep, is up all night. Her ears buzz, her eyes blur, my brother is dead, my brother is gone.

At 18, Ari was in the business of life and death. He was a paratrooper, a sniper and had killed people to save his unit. The year before he died, he saw his best friend run over by a truck, held his unconscious body for hours, and carried him home.

April 13, 1994. Ari moved quickly, to the back of the bus. On their way to a friend’s memorial, his buddy Gai had forgotten his pass, so Ari slipped him his through the back door. The driver saw and jumped out of the bus to give Gai shit, when Amar Salah Diab Amarna, a desperate, young Palestinian with four pounds of home-made acetone peroxide explosives and hardware in a sports bag, climbed on.

Tali stumbles out of the plane, on to the tarmac and straight into an Israeli army jeep. They rush her back to the heart of the desert, to the foot of her parents’ broken home, in the pitch-black night.

Frazah slips out of the darkness to greet her. Before she sees her own family; Awwad’s grieving mother, her beloved surrogate Mom.

Dark tattoos trail down the contours of her weathered cheeks, Frazah’s tiny body and indomitable spirit are wrapped in a traditional black dress. She takes Tali’s stricken face in her rough hands, and kisses her shattered heart. Crying love, one love, they reach for each other in a timeless embrace. 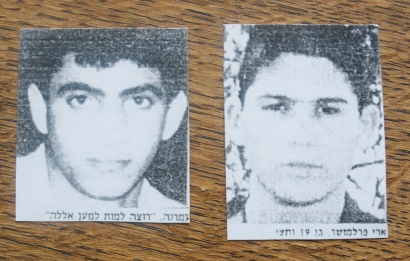 They could be brothers.

*Please share these stories to help stir the heart and promote love.

Tali Goodfriend is an instructor in Early Childhood Education and teaches Art as a tool for Social Awareness. She uses Compassionate Listening, Peace Education and her experiences in the the Middle East and the Montreal Dialogue Group (for Arabs and Jews) in her work. 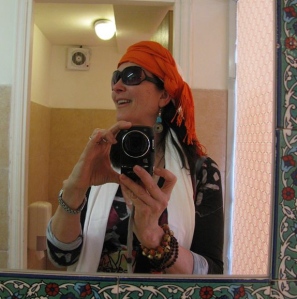 Thank you, dear Tali, for trusting me with your story. All respect for your brute strength and love as you walk through the minefields of Israel/Palestine, cultivating compassion and building bridges to peace.

FAN THE FLAMES: Feel the love.

GOOD NEWS FLASH: Grateful! This post, like Part 1, was Freshly Pressed by the good peeps at WordPress, who will feature and help promote it. To see my other Freshly Pressed posts, click on their individual widgets on the right sidebar. Proud.

My friend Michal just introduced me to The Feast Worldwide. They are organizing people in cities everywhere, to sit down for dinner, collaborate and make the world a better place. Join them for The Feast on October 10th -11th to listen to world-renowned speakers, participate in illuminating workshops, and collaborate with innovators across disciplines to re-imagine what’s possible. Bon appétit!

45 Responses to Love & Squalor in the Middle East, 2

Leave a Reply to Burns the Fire Cancel reply