The Heart of a Revolution

I am attracted to but also repelled by the cynicism and irony I see everywhere (periodically through my keyboard), that some of us like to think helps us deal with the traumas of our world. Mostly, I think, it masks our anxiety and fear. But, as the German auteur filmmaker Rainer Werner Fassbinder warned so flawlessly in his heart-throbbing film: Fear eats the soul. True, it may seep in when I’m not looking, but I’ll be damned if I let it eat mine.

Allow me to share the inspiration of a revolution:

While I was studying film and the art of the party in the 80’s, Shirin and Mehrdad were being tortured in an Iranian jail for their political beliefs. While my friends stayed up all night dancing in clubs, their friends stood in front of the firing squad, and died. Mehrdad was put before it two times, to make him to talk. Shirin was put in a wooden coffin for months at a time, to make her talk. Neither one did. After being arrested, Shirin, an extraordinary singer, did not sing for ten years.

I asked Mehrdad how he continues to be such a passionate activist, why his soul is so strong today, and this is what he said:

The problem of death was solved for me. I’ve been through it and accepted that I would die. I have to make the best out of my life, and for my friends who were executed. What couldn’t kill me made me more alive.

Shirin will be singing and baring her soul as part of their three-day conference in Montreal to commemorate the 1980’s Massacre of Iranian Political Prisoners. She will also be a part of a panel discussion as one of the subjects of Masoud Raouf’s award-winning film ‘The Tree that Remembers’. She and Mehrdad have set up rows of beds in their home, to welcome ex-political prisoners from all over the world, and plan on getting little sleep. Art and Resistance. Breaking the walls of silence.  Speaking out against tyranny with our humanity and love. 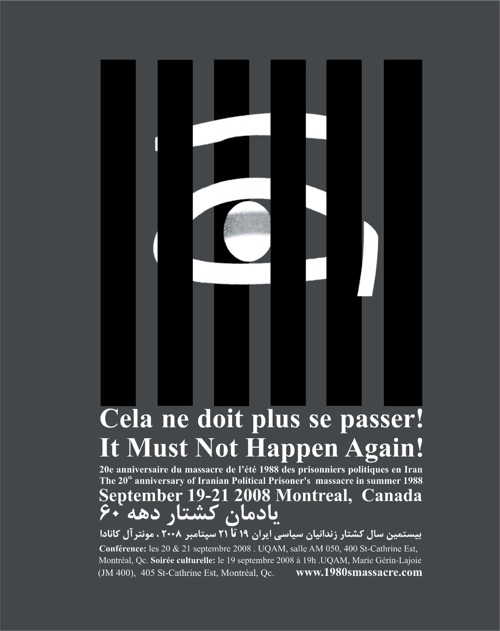 For Your Inspiration: Shirin and Mehrdad met as young students and political activists. After years apart in prison, passing messages (and a wedding ring) to each other through their families, they re-united, and married in Istanbul. A thriving architect today, Mehrdad is building Shirin and their two beautiful children a new home in Vancouver, full of windows overlooking the ocean. Shirin travels the globe, singing her universal message of tolerance and peace. Wherever they go, they are embraced by a world-wide community of family and friends.

GOOD NEWS FLASH: You can buy your own copy of Fassbinder’s Ali: Fear Eats the Soul (Angst essen Seele auf)  right here. See it, and let it rock your world.

7 Responses to The Heart of a Revolution